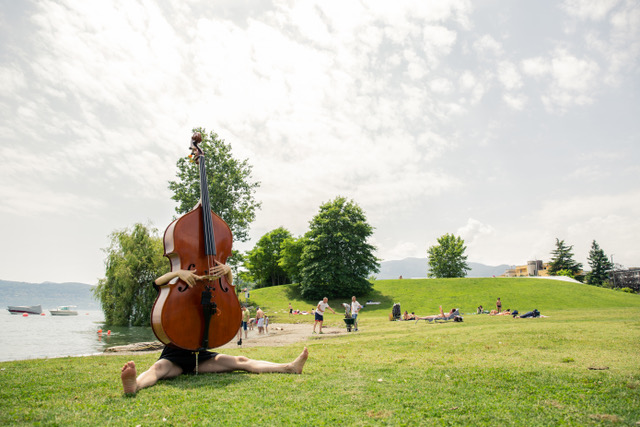 “Qualities that, in truth, are the mark of the other three projects presented: in various spaces, also outdoor of the teatro Il Maggiore, the choreographer and dancer Sara Marasso and the musician Stefano Risso proposed their project  in a sort of format that is feeded by the different urban spaces in which it is reshaped and re-create at each time. It starts with three elements:  a dancer, a musician and his cumbersome double bass, and the relationships that are established not only between these “entities” but between them, the space in which they temporarily perform – the theater but also the boat that connects the two shores of the lake – and the inhabitants of this place. A relationship further complicated by the crossing of languages ​​- live performances but also video and photography.

Almost like a matryoshka that, nevertheless, is not resolved in an intellectualistic game but draws substantial nourishment from the happy unpredictability of the relationships that Marasso and Risso establish with the community in which they find themselves acting: the local photography and video maker, the employee of theater and the citizens with whom they create relationships and entertaining simple choreographies, also asking them to reinvent their own way of relating to the outside world. It’s a double bass that seems to obstruct our gaze but, in reality, sharpens it: a door that can be opened revealing a new perspective on the everyday landscape”.