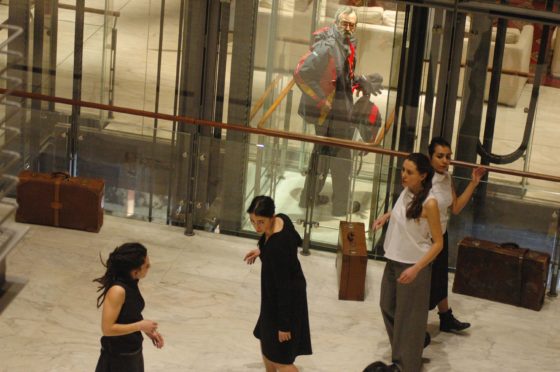 “Seven different performances in the Olypmpic villages in Turin, Sestrière, Bardonecchia, at the Hotel Le Meridien Art+Tech and at the Oval. (…) Jukebox, designed and danced by Sara Marasso involves five dancers on famous songs, continuously mixed by a couple of djs. No costumes, only ordinary dresses for the artists who will start dancing on the notes of an improvised music”.
S. Trobetta, Sistema Musica, 2006

“The future of the show is the creation of environments. They have spent a lot of money to build ‘events’, but the events are not the end, they are the means to build that thing that is much more complex, the environments. Let me explain with an example: Dance Break. They are danced intervals in Olympic venues. Well, it seems a miracle but it is an environment. Italo Calvino in his ‘Città Invisibili’ says that cities are not made of bricks but of relationships. Dance Break is a network of relationships that builds a cultural environment. “
G. Vacis, La Stampa, 2006