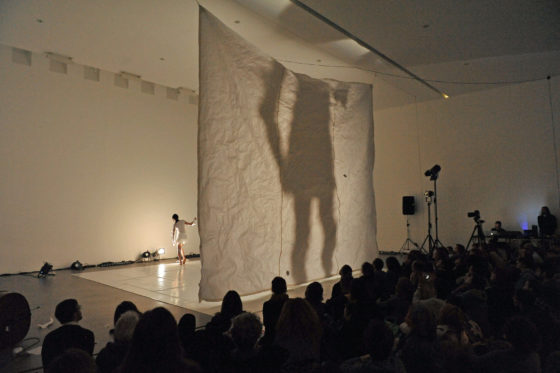 “I love dance certainly not to see aestheticisms closed in the circle of perfection, what a bore; I look for the opposite: the explosion of anxieties that search for their own place in the world of imperfections. (…) In your Mapping Extended: each of you, Sara, Alessandro, Stefano is holding his own white placenta on which, whether you want it or not, you will write your sentence or your salvation. Nonexistent. Unrelenting. That placenta you consecrated and desecrated – noises, sounds, movements, suspending the audience in the space breathless between malaise and enchantment. You have given us, the public, the choice. You survived by devouring the white of the placenta. Dash into the sky to make it an adorable idol. To which never submit, indeed, in continuous struggle, between limbs, sounds, indifference of non-random passages. Until exhaustion, we stunned by glassy sounds that the nails will never scratch. The arts were not born to console cheerful spirits but as a search for a meaning that does not exist. Inevitable to look for. Always”.
R. Rostagno, paraphrase of his presentation at the final evening of the Motori di Ricerca  project Lavanderia a Vapore Centro Regionale per La Danza, 2016

“Mapping Extended” opens on a scene of dazzling whiteness, hit by a cold electric blue. The sound becomes deafening and a backlight blinds the audience while a body is enclosed, forced between the intrusiveness of the two timbres. It is in a genesis with strong, extreme colors that the body mapping of Sara Marasso comes to life. From the fetal position of the onset the movement is built up with sobs and breaths, fragments of trajectories and sobs of gestures, and the dance, ductile and decomposed, grows rippling the paper that inhabits the scene. The paper is the material interlocutor of the trio Marasso – Sciaraffa – Risso that traverses the gaps between its ripples and, between sonorous distortions and swirling, shape and decomposes ineffable and infinite folds.”
G. Muroni, Teatro e Critica, 2016