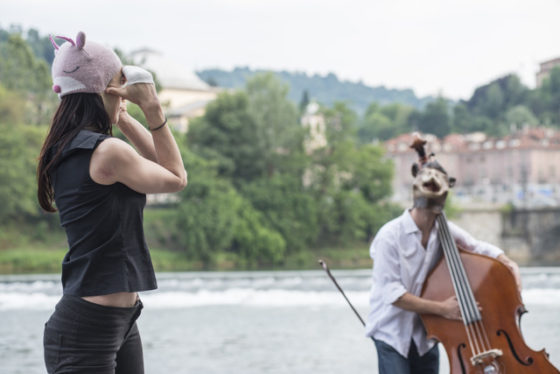 Equilibrio Residuo is an open format that explore the idea of composition. The bassist and composer Stefano Risso and the dancer and choreographer Sara Marasso will dialogue in a place inviting the public to follow the suggestions and the images that emerge from this meeting without words. The perfomance combine a strong structure with some space for improvisation in our belive that both, written and in real-time dialogue, are modes of composing. That is a way to create a fragile and uncomfortable space where a relationship between sound and movements could be explored and a new balance or “Equilibrio” could be found.

Never Mind combines each performer to her/his double.
This double, in the form of a shadow, a sound or a real image in the present or in the past, ironic or intellectual, builds a tangible identity by means of imperfections, variations and delays. Reliable and concrete.The same duality forms the vital afflatus in everyone, by linking the labored breath in the run and the slow, vaporous breath in a copious snowfall.

INSHADOW International Festival of Video, Performance and TechnologiesTeatro do Bairro LISBON PT
Thanks to: Sylvie Accornero and Franco Sofi,  Vo’ Arte team, special thanks to Joao