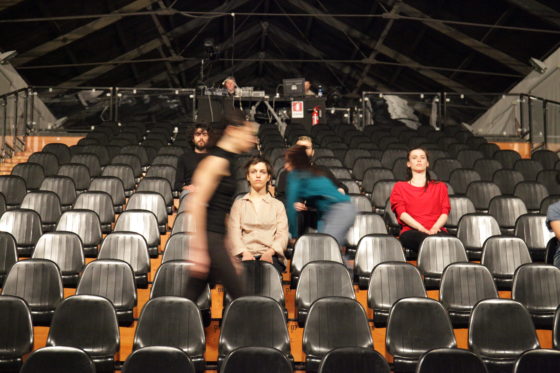 Mapping is the map-making of a place through the research of ways and tools for measurement of the space starting from the body as unit of measurement and perceptive entity.
Thinking about our bodies, as representing entities, as parts of the space and as spaces themselves. The body itself is treated in its materiality, playing with density and mass variations.

Project of Lavanderia a Vapore
in collaboration with Fondazione Piemonte Live

After its first open presentation to the public at Lavanderia a Vapore, #Mapping has become a creation project, where the idea of the show in residency replaces the one of the rerun.
And it has been re-created in some festivals that have welcomed it in residence:  the Gardens of Venaria Reale Palace for Natura in Movimento, the Boarding room of Meina’s municipality (Novara) for PerCorpi Visionari Festival, the ancient palace of the city (Antico Palazzo di Città) in Cagliari, for Da Dove Sto Chiamando Festival.

Mapping intends to work in the space starting from the special features of each place, chosen as a place of representation in an interdisciplinary perspective in order to create a relationship and a mutual interchange between the various languages involved: movement, music and visual materials.
Choreography, musical and visual composition articulate each other inside a composed structure.
Such reference shapes the space´s measures in which the action will be proposed to the audience, always maintaining a strong research core: to perceive space in terms of weight, body, sound and visual imagery.
As a project of ongoing creation closely linked to the space in which, in turn, is presented, Mapping promotes local networking in the area where it’s hosted.