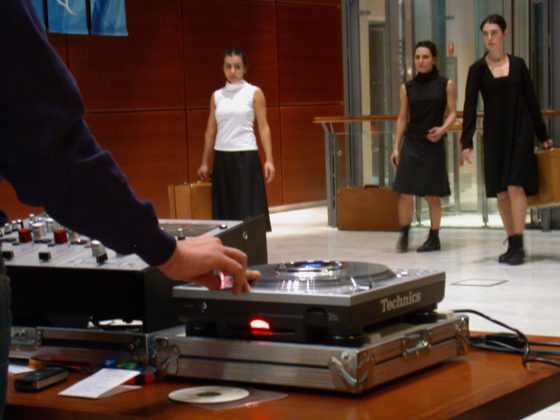 The song is like a comfortable dress
that does not stop wearing,
a temporary obsession, that song on the radio that you look for and it reminds you so much …
Jukebox is the dance that forget the memories,
it dirties songs, it mixes them with noise
and other sounds
to make each song becomes a space that looks like those places of passage:
hotels, stations, airports …
open containers, suitcases ready to travel.

The initial idea: combining a choreographic contemporary dance with songs, sound material created for listening.
I chose to use the songs dulling the vein that binds to the memory, to the collective and personal memory and that makes a deja vu to the past, putting them in relation with the theme of the meeting, the trip, which always arouses surprise, leads news and resembles the game.
This is why I left the movement in search of the body linked to the meeting, primarily the hug, which have built the choreography independently from music.
For this reason the songs needed to be contaminated with sounds and noises in order to bring out indirectly that emotion always ambiguous and cumbersome that each meeting arouses at the beginning.
As those travelers, ready to leave, they chose to carry around the minimum, knowing that the encounter is unpredictable and you don’t prepare better if leaves load; so in the creation’s process, we felt that tension to be absorbed by the songs, the memories and the emotions, and at the same time the need to completely detach ourselves in order to create something that happened only in the scene.