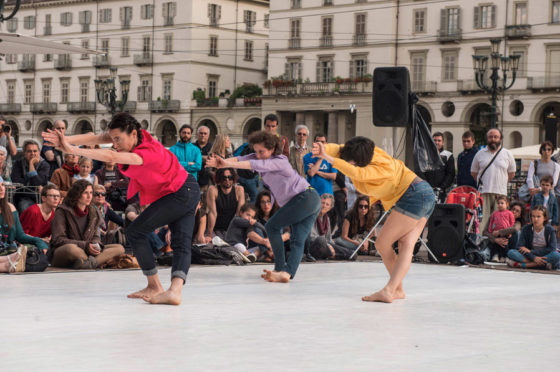 “(…) Bausch came to mind when I saw a performance at Interplay, a street dance festival in Turin. It was a trio of women choreographed by Sara Marasso in a piece called No strings attached #3, and it was arresting principally because of the expressive power of Marasso herself, an intense, beautiful head supported on a spare but ruggedly articulate frame. She dances with a silent mimic quality and her long arms seem to be able to create meaning out of space. But what struck me most was her face that did not register any emotional control over the rest of her body but responded to impulses in the same way as her torso, arms and legs. A few days later I came across a passage in Laurence Louppe’s Poetics of Contemporary Dance where she discusses the fundamental change in expression that was part of the contemporary dance evolution: ‘Firstly, (the contemporary dance body) had to allow the body to take the expressive role that facial expression had so far monopolized.’ Then Louppe quotes from Hanya Holm: The face is of course the mirror of all that goes on, but it should not be more prominent than is intended and must not substitute for all that which isn’t going on in the body. This clarified what I had seen in Marasso and which she conveyed so convincingly; there is an integrity to the physical expression when this occurs. Too often the face resorts to displaying its emotional leadership and distracts by its overemphasis. The two women with Marasso (Teresa Noronha Feio and Maura Dessi) tended to fall into this mode, which gave Marasso’s dancing by comparison a clarity of gesture in which each element of the body had its place. Interestingly a colleague found Marasso’s performance lacking in emotion because the face was not emoting. For me, the entire body was expressive and in harmony. The emotion came through the body’s gestures.
N. Minns, Writing about Dance, 2014

“The project No strings attached (…) An interdisciplinary research and composition perspective that intersects and expands the expressive languages of dance and music.”
F. Bernabini, Danza Effebi, 2014

“Her creations, choral or for herself, for the theater or in urban spaces carry the sign of a direct and accurate research marked by freshness and sensitivity”.
C. Castellazzi ,Interview with Sara Marasso for the publication edited by Piemonte Live, 2013