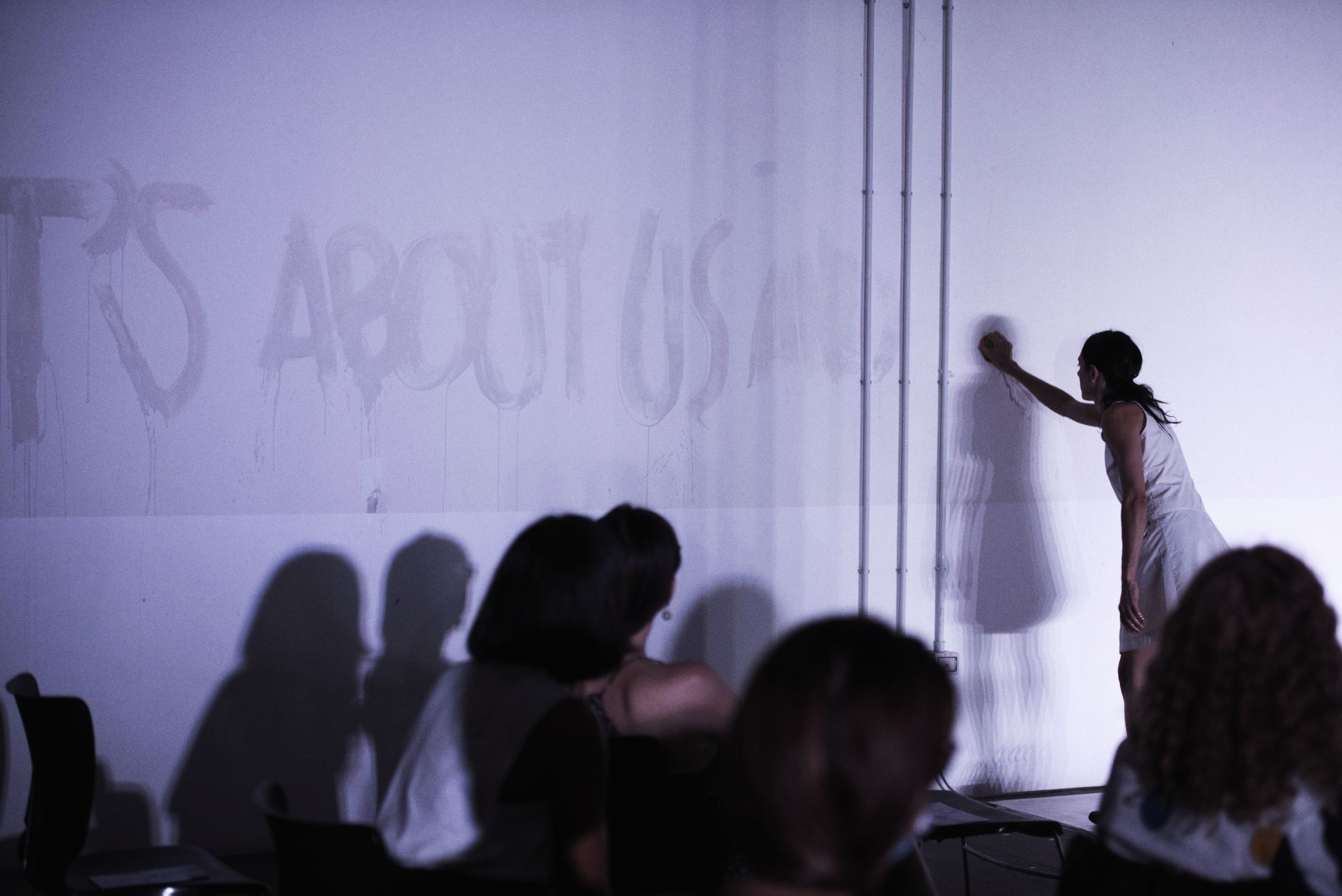 «It’s the idea of a not oppressive wall: a wall without heavy moral stratifications, without judgments, and  therefore open to interpretation. And so, the initial question, “What’s beyond the wall?” dissolves in a  dialogue with the wall seen not as an obstacle but as a structural condition. The wall delimits the space,  imposing on the performers internal trajectories that collide with the walls but without anguish: they are  explorations and attempts to force, not assaulted to destruction. And the question gets an oblique answer:  “It’s about us and invisible things”, that Marasso writes in large letters on the wall, referring the sense of the  border and closure to an individual and social responsibility (concerns us), but also things that we do not see,  they’re beyond the wall, but they could be here, or inside. And as if by magic, the enormous graffiti with the  writing slowly fades away, as if absorbed by the wall itself, sucked by the porosity of a concrete wall that  seems to breathe as if it were alive.

Just as simply, even the ideal lockdown inside this box vanishes, with performers climbing over the wall,  while the sound carpet expands with many voices (“us” and “invisible” too: those voices are us, and they are  an invisible crowd), to reiterate a multitude of thought flows almost trapped and still free. Over the wall,  Risso plays the double bass. But it is not Rostropovich’s cello on the rubble of the Berlin Wall: the sign leads not to the destruction of the wall but to the coexistence with a barrier that is an inevitable part of our nature.

In the final image the wall, which has now reabsorbed the graffiti presenting itself as an immaculate wall,  resists our gaze, but above it the two performers reaffirm the vitality of body and music, against the  background of a wall of trees and a deep blue sky, while on a side wall a video sends back their bodies that come and go to another wall: and so, the immaterial wall of the video projected on the real wall offers an  additional possibility of comparison, clash and encounter, before even this last wall absorbs even this image  in motion in its indecipherable compactness of concrete».

«The dancer begins by analyzing the wall in detail: she seems to want to make it her own, understand it, (ap)take it. Impossible to look beyond: bricks, matter, prevent you from seeing beyond. All that remains is  to look at the wall itself, in every detail, and enjoy the force of attraction that brick limit releases. (…) We, the public, are constantly moving towards the wall, as if drawn by an invisible magnet. And we give that  same energy back to the world: Sara Marasso’s dance is anything but fluid, contracted, expression of a non human power. Yet it allows and guides the movement of a human body. It is here that the limit stops being  such: although invisible, what is beyond affects the lives that are here, moves bodies, opens questions, makes  us part of a whole that we do not see but that invests us. The wall, a physical, material reality, is no longer  an obstacle, but a definition of spaces, a delimitation that does not limit communication or connection with  the world».

«What’s behind the wall? A question that often comes back, persists and disturbs me in the evenings of  existential thoughts and then… I too have often felt that natural anxiety, fear, that makes me stay behind  that wall, because I am safe, because it is what I have learned that you “must do”… Of course, I’m not talking  about the Berlin Wall or the one almost made in Mexico, I’m talking about the walls that cut my eyes off and  shorten my mind. I’m talking about what I thought, as I saw how the dancer pushed, jumped, stopped,  thought and returned to push…».