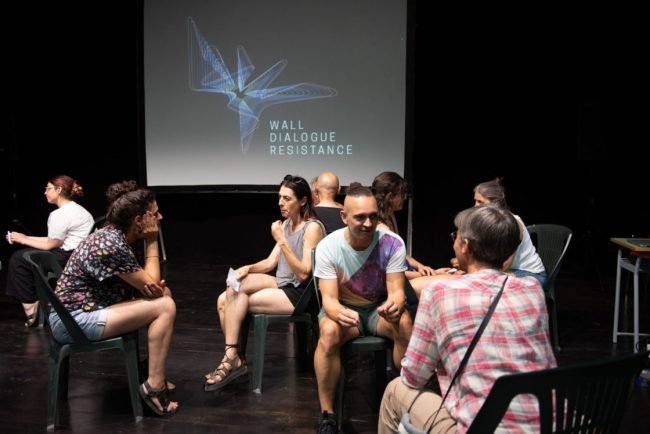 How performing arts could be an experience of resonance in a time of collective apnea?

The project WALL DIALOGUE RESISTANCE, co-funded by the European Union within the Creative Europe programme, led by Teatro di Sardegna as main partner and with the artistic direction of Il Cantiere – Sara Marasso and Stefano Risso, aims to recreate a different way of experiencing public space through direct and indirect involvement of the audience in the creative process, describing a landscape and a community through a contemporary interdisciplinary narrative. The project wants to stimulate the dialogue / participation / interaction of European citizens through a human site-specific participatory approach to the creation in performing arts, to apply the creative process for overcoming separations from each other, and to disseminate a methodological creative format to make culture more inclusive.

The structure unfolds through five artistic residencies hosted by the partners involved and realized through a single journey linking them all, which takes place from August 21st to October 1st 2022. The residencies will use action tools such as workshops, thinking laboratories and the popular crossnational game 1,2,3 STELLA!

Each residence will end with a PERFORMANCE as a collective emotional experience of a common space. After this, a period of reworking and post-production of the multimedia and textual contents produced will follow, and it will include a FILM, a PODCAST, a GRAPHIC STORYTELLING and a PERFORMANCE FORMAT.

The project focuses on the open process, emphasizing the work of questioning and research, on the eco-sustainability and the human impact that will resonate with the people of the four Mediterranean countries involved: Italy, France, Spain and Portugal.

The research, aware about the complex times we are all living, chooses to explore the concept of the WALL as a physical and symbolic guide for a creative process considering the meanings of the words dialogue and resistance from the following perspective: Wall as a symbol of the spatial and emotional distances existing in human relationships, considering limit related to opportunity; Dialogue as involvement of bodies and voices in relation to the question:what’s beyond the wall?; Resistance as ability to look beyond, to reinforce the tool of imagination, to see a common space that can emerge in all its necessity.

The wall relates us to the concepts and questions around balance, freedom and boundaries, offering a practical experience about how verticality can dialogue with the horizontal plan, and how the individual is placed in a space where everyone is connected. The wall with its qualities becomes the tool to explore the resonance, the limit and the quality of the resistance in terms of movement and sound / rhythm recognizing the pivotal role of the body.

The history of the project can be found here